When I was 7 yrs old, my mother made this gift for my children. 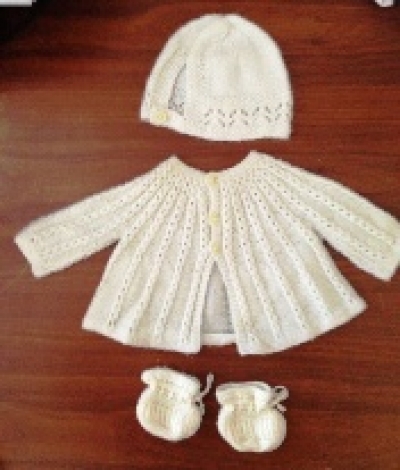 My mom died over 33 years ago. I was 7 years old. And last week, I found out that before she died, she knitted some clothes for my children. Yes....while I was seven years old, she made some clothes for the grandchildren she would never see. She had given them to my aunt, who forgot all about them, until a few weeks ago.

I can't get my head around this. I don't have anything from my mother. Only 1 or 2 memories. And now I have something she made with her own hands. If she knew she was dying, I wonder if she had tears streaming down her face while she knitted this, acknowledging the loss she and I would then soon encounter.

And it makes me think now. Cailin is nearly the same age I was when my mother died. Rene, (Cailin's mom) was so inspired by my story, she has written letters to Cailin that will be put away and given to her on her 13th, 16th, 18th, and 21st birthdays. And each year Rene will take them out and update them.

Her connection and legacy to Cailin will be there. A priceless gift.

More in this category: « Your parenting style answered using the DISC profile test If you ever get stuck, ask yourself these questions »
back to top