Asking him questions quietened him down 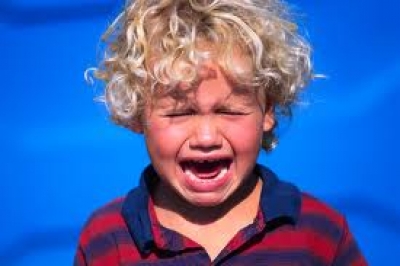 The watch that Luca had been given came with these red rectangular sheets of paper.  Luca had lost his and could not find them. This was around home time and he was tired and he lost the plot. I eventually found one sheet (white and red speckled on one side with plain white on the back).

But it got bad and the crying hysterical. I again decided I know I can handle this differently. My father was saying the usual, ‘Come Luca, stop crying like a baby, that is enough now.. blah blah", you know the usual way we handle things.  I told my dad that saying things like that would not help right now and said goodbye and we left.

In the car, Luca was crying and crying. Instead of doing as my dad did, which we are all guilty of, I asked him instead, ‘What are those papers for Luca?” He told me, between breaths of despair, that they are for writing down messages to your friends and then you drop them on their doorsteps of their houses.

I continued to ask more, so what sort of messages would he write and to who and so on and so on.  He chatted away, getting less upset, talking about it.  I eventually said, "geez, you are really upset that you lost them hey?"

He said he was and he really wanted to have them back.  So I suggested that I go to the copy shop the next day and get some new ones cut out the same size.  He then rattled off all the instructions to me.. it must be red and white speckled on the one side mom, and plain white on the other, and the exact same size.. blah blah.  And when will you have them mom… By the time I finish school etc etc.

I went and got them cut for him later that afternoon and he has them kept in a special bank packet ever since and THAT IS THE END OF THAT STORY!

More in this category: « How my new skill saved a big blow up Solving a tantrum over spilt milk »
back to top