Warning: count(): Parameter must be an array or an object that implements Countable in /home/www/robinbooth.co.za/libraries/cms/application/cms.php on line 464
 Amanda has other parents watching her as she deals with her fighting and upset children 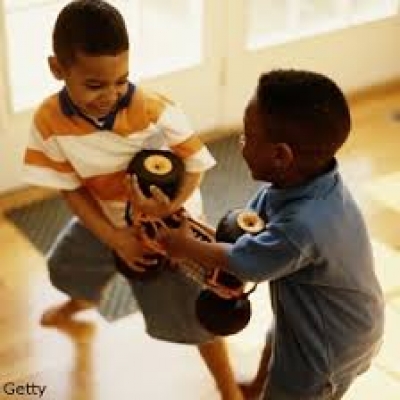 We were at a braai at a friend's house on Sunday, it was the first time we had been over to their house, there were 6 kids who were 7 and under so lots of activity and lots of new (to my kids) toys. At one point, my boys were fighting over a cork pop toy gun (something they hadn't ever seen before). First I told them that I needed to hold the gun while we were talking about it. This helped to move their attention away from the object and onto me and what I was saying. Then our conversation went something like this:

Me: I see two people who both want to play with the same toy. How can we make this work for both of you?
Fin (7): I had it first and Thomas was trying to snatch it away.
Me: Thomas when you want a turn you need to use your words and ask Finley politely.
Thomas (3): Me want a turn, please Finley!! Finley not giving me a turn!!
Me: It sounds like it's very frustrating to have to wait for a turn. It also looks like both of you are very interested and excited about this new toy and you both want to play with it right now. Can you think of a way that we can make that happen?
Thomas: I know! Let's do it together!
Me: Ok, what would that look like?
Thomas: Finley hold it and me hold it.
Me: So your hands and Finley's hands on the gun?
Thomas: nods
Me: Finley, would that work for you?
Finley: No!
Me: That's not going to work for Finley, can we think of another way for you to play with this together?
Finley: We could find the other gun and Thomas could use that one and we can pretend to shoot each other and then we could swap?
Me: Thomas, would that work for you?
Thomas: Yes!

At this point I was still trying to set up some boundaries around time limits so everyone was clear on when the swapping would need to happen, but they had already run off happily shooting each other. I turned back to the table of adults and was greeted with a high five from one of the parents and a, 'That was amazing, I actually have goosebumps...' from another.

I've been working on these skills for years now and it may seem easy from the outside, but I still sometimes feel flustered or anxious to resolve conflict (especially with a captive audience of other adults!) effectively especially when emotions are running high.

Although there is a simple formula and procedure for the conscious conflict resolution I find that in situations like these (busy social gatherings, parties, etc.) off the cuff, my starting point is always to describe what I see and to ask the kids for a solution. After years of playing 'judge', where I had taken on the role of problem-solver and they were used to me always coming up with all the answers, it took my kids a while to go from the 'I don't know's' to actually engaging and offering ideas. The next step is all about listening to their responses, tapping into what they are feeling, and being able to make them feel understood and heard. And if you can just keep the conversation going, checking in with each child and acknowledging emotions along the way, you'll eventually get there. After all this time, it still amazes me how empowered I feel when I'm able to get the results I'm after.

More in this category: « 3 children in my bed - and how I changed it to a morning of flow
back to top