Warning: count(): Parameter must be an array or an object that implements Countable in /home/www/robinbooth.co.za/libraries/cms/application/cms.php on line 464
 I want the truth. Who started it? 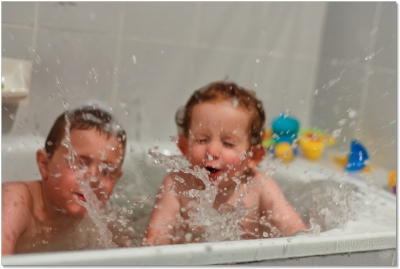 I clearly remember this father asking me how to instil the value of honesty into his children. We were mid way through our workshop on the topic of “Engaging children’s cooperation” and he seemed really perplexed that his children still did not own up to what had happened. 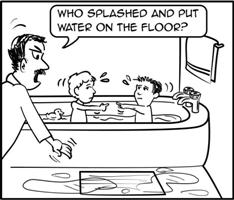 I picture this dad walking into the bathroom, taking a look around, his hands then moving to his sides, fists clenched. His voice would be strained as he took on the detective attitude, his eyes trying to pierce into the history of the previous 5 minutes.

He didn’t seem to understand that what he was really asking from his children was courage, not honesty: the courage to own up to something in the face of the huge emotional disappointed the dad felt and the guilt the children therefore experienced. If there are no negative consequences to your actions, then being honest about them is easy. When there is a consequence we do not want, it takes courage to be honest. The children in the above scenario feared the ‘emotional’ smack the father would have given had they been honest.

The word courage has its roots in the Latin word ‘cor’ meaning ‘heart’. It relates to the inner strength that a person feels at the time when fear is present. If there was no fear, then you would not need any courage. The amount of courage you need is going to be just a bit more than the amount of fear you feel. And the fear you feel is just a belief you have of what you think will be the consequences of your action. The only thing standing in the way of people and their dreams is the fear of failure. If you knew you would succeed in your goal, you would easily follow your dreams. But the thought of what may happen if you do not succeed holds you back from even trying and persisting until you get there.

Courage allows you to run your own race. Courage allows you to do whatever you want to do because it’s what you believe is the right thing to do. Courage gives you the self-control to persist where others have given up. One definition of failure is when you give up having the courage to try again and again.

Ultimately, the degree of courage you live determines the amount of fulfilment you receive. It opens up the possibility that taking personal risks take us closer to where we want to go. It supports us in taking on the challenges of living the life we want to live opposed the life we feel we have to.

Yes it may seem as though you need to take a few risks to discover what you are best at and what you really want for your life. There is also the apparent risk that comes with self examination and soul searching. But no, there is never any risk in discovering yourself and the mission of your life.

So what is your fear holding you back from in your life? And are you waiting for your fear to subside or disappear before you go for it? What would it be like for you if the choices you made were not based in fear, but supported by your courage

Have the courage to dream that you life is more than the sum of your current circumstances.

More in this category: « Letting them grapple with conflict on their own How blaming this child was going to the teacher no-where »
back to top