Warning: count(): Parameter must be an array or an object that implements Countable in /home/www/robinbooth.co.za/libraries/cms/application/cms.php on line 464
 While listening to him, his tension dissapeared.

While listening to him, his tension dissapeared. 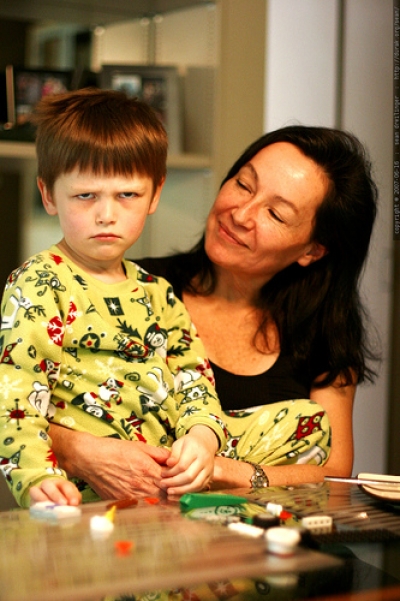 Today was a very powerful session (and quite emotional too) and my husband and I were reflecting tonight how much we’re enjoying the course. Then – the challenge presented itself.

Background - Jack asked for a “duvet day” yesterday (he’s allowed one a term) and he was up and down to the loo several times that morning (a clear sign that he’s feeling anxious) so that’s what we did. This morning was all fine until we got a message from Tessa that Jack was not feeling well, so we ended up taking him home at eleven.

After an hour and a half I was doing the usual asking if there was anything he was worried about and “Jack, I believe you’re feeling sick, but you’re NOT sick, I’m just downstairs and I’ve got to go and cook supper for dad and I”.

Panicked, teary child downstairs two minutes later and “I wish I could go to sleep, but I can’t”. So up I went again and was just lying with him, quietly but silently frustrated as he made another trip to the loo and then asked for yet another minute when I said I had to go. And then I thought about our session this morning, about being present with our children, praising them and acknowledging the people in our lives.

I said something along the lines of that I was really proud of him the way he had dealt with the move to his new school, that he had made friends and his teacher thought he was really special, and he was happy to go to school again and enjoying learning and that his new school looked like it was really working for him.

I went on to say that his body was telling me that something wasn’t working for him right now and it could be at home, school or about life but in the same way that I was trying hard to tell him and his brother when the situation wasn’t working for me (rather than just lose my temper and shout -and scare them), I needed him to tell me what wasn’t working for him so we could look at how we could make it work for him – in the Synergy way!

I asked if he wanted to share anything and he said no, so I told him I didn’t need to know right now but when he felt he had something to share, I was ready to listen. The tension in his little body eased immediately. I left, he came downstairs to cuddle while I was cooking and when I went upstairs five minutes later, he was asleep. On reflection, I guess it was just observing and describing what was going on rather than asking for answers and trying to fix the problem. Powerful Stuff!!

More in this category: « If you can't go to the sea, bring it to the swimming pool. How I got our 5 year old to do some adventure sports »
back to top