Warning: count(): Parameter must be an array or an object that implements Countable in /home/www/robinbooth.co.za/libraries/cms/application/cms.php on line 464
 How to solve a problem by describing

How to solve a problem by describing 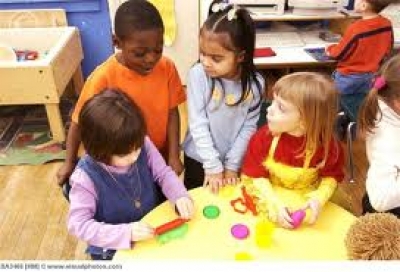 The social skill of taking turns is one that takes time, patience and many long faces to develop. On this day, we had our play-dough table nestled up against the wall and only two seats for the children to sit at.

After about ½ an hour, some children came up to me complaining that they wanted a turn at the table. I asked them if they had spoken to the other two at the table and they said that they had. I thought that it was that time again to start developing sharing skills.

“Okay guys, we have two children playing dough and another two who would like to play. What shall we do?”

Both parties voiced that they each wanted to play. We were heading towards a system of time allocation when another child (5yrs old) who was standing nearby piped up and said.

“I have a good idea. Why don’t they move the table away from the wall and put another two chairs on the other side, then all four children can sit at the table?”

My mouth hung open for a while till I said, “That sounds like a good idea. What do you all think?” The children agreed and they organised themselves.

As I was walking away from the table I mentioned to the idea-giver, “Ashwyn, that was a good idea. You thought a lot about how they could solve their problem. Now they can all play together.”

More in this category: « My daughter of 5 actually has good dress sense My daughter keeps asking to sleep in our bed. What should I do? »
back to top